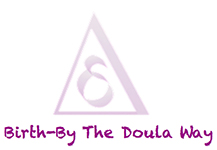 First came the name, after thinking of a few ideas and saying the name out loud.

Birth-By The Doula Way had an appealing ring to me and even a song can eventually be created from the name. I am not there yet though with lyrics and tune!

After which came the logo, I wanted something simple but significant for that I have to explain to you where the word doula comes from and its meaning.

A doula comes from a Greek word meaning a woman servant in the context of a woman assisting another during birth.

The colour is an attractive shade of light purple and I find blends well with many colours.

A doula, also known as a birth companion and post-birth supporter, is a nonmedical person who assists a person before, during, and/or after childbirth, as well as her spouse and/or family, by providing physical assistance and emotional support.

This doula also can assist the woman and her partner, in preparing their birth wishes, stay with the woman throughout her labour (including early labour at home or in a hospital or birth centre, and active labour), provide emotional support and several physical comfort measures    during her labour.

Delivered: The empowering journey toward your ideal birth and beyond